Production soars in parts of Africa 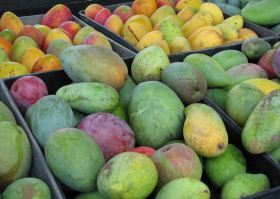 In French-speaking Africa, fruit and vegetable production increased by over 50 per cent in the decade between 2004 and 2014, according to statistics from the UN’s Food and Agriculture Organisation (FAO), Jeune Afrique has reported.

Production stood at 43m tonnes for West Africa and 18m tonnes for Central Africa, thanks in particular to an increase in cultivated areas of 4m hectares over the period.

This strong growth concerns both the crops produced to satisfy local markets and those destined for exports, which still represent less than 10 per cent of the volumes in each country.

For example, the number of Ivorian mangoes shipped to Europe increased by almost 50 per cent in 2016, while Senegal reported that it was approaching self-sufficiency in onion and potato production, with nearly 90,000 tonnes for an annual consumption of 95,000 tonnes.

"There is a significant development in market gardening, as seen in Senegal, where the climate is very favourable and an efficient logistical system has been put in place," confirmed Hubert de Bon of the International Cooperation in Agricultural Research for Development (CIRAD).

States are reportedly taking measures to facilitate the marketing of domestic crops, including blocking imports during harvesting, as in Senegal, to preserve onion production, or to extend the cultivated area, as in Côte d'Ivoire.

"In our country, fruit and vegetables are primarily intended for local consumption,” said Nouhoun Coulibaly, general director of planning at the Ministry of Agriculture of Côte d'Ivoire. “In the context of climate change, we have therefore set up a total irrigation programme to be able to produce in all seasons.”

However, exports remain the most profitable route for producers. “For watermelons, for example, we earn three times as much, or 1,000 CFA francs for export, compared with 300 when we sell to local traders, except in times of high demand, such as Ramadan," explained Hamidou Kane of the Senegalese cooperative Delta Prim.

Exports equally enable better production planning over the year, according to Kane, including for butternut squash and melons produced in the Senegal River Valley near Saint-Louis. "These are contracts that run for several months, which gives us visibility and allows us to make the plots more profitable," he explained.