Consumers in the UAE want local

Local production is enjoying a lift in demand thanks to its new perception by consumers, aided by sustainable farming practices, new technologies and governmental support 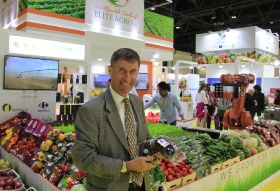 Just over five years ago, locally produced vegetables undoubtedly suffered from a negative public perception in the UAE, as disbelieving consumers quizzically regarded the rare domestically grown items in the shopping aisles, wondering how iceberg lettuce, cucumbers and peppers could flourish in such arid, desert conditions.

That attitude has not completely vanished, but the public’s acceptance of the notion of local produce, helped by the use of more sustainable farming practices and the latest technologies, plus increasing interest from the retail side, has been evident.

“Historically, local produce was not held in very high regard,” says Peter Ensor, marketing and sales director for the food and agriculture cluster of UAE producer Elite Agro, which sells under its Elite Harvest brand. “But practices have changed and retailers have started supporting local products, so they are now more visible and consistently on the shelves 12 months of the year. A study from 2014 showed the huge change that had occurred in public perception since 2011. In three years, there was more of a desire from consumers to buy local and take things like traceability and food safety into account. Now we also have the support of the government to encourage local consumption.”

Crucially, consumers who have experimented with local produce have been rewarded with excellent quality. “You cannot tell the difference between, say, our aubergines and Dutch aubergines,” says Ensor. “We have all the certifications, the freshness, the packaging and the flexibility. We could sell at European prices, but we offer a much better shelf-life.”

According to Ensor, the company’s strategy is to reach out more to the consumer in collaboration with its partners, informing them about local produce, about where and how it’s grown, as well as its freshness and taste.

“We need to get in front of the consumer, offering tastings and organising promotions,” he says. “This will be done through partnerships with the retailers. We also have a medium-term strategy of visiting schools to educate kids about local production, or inviting them to the farm. Social media is a massive tool for us to be able to communicate with young people, especially using video content.”

Elite Agro is also conducting research in the UAE in order to gauge consumers’ perception of fruit and vegetables, including their view of local produce compared with imports.

“We are doing a combination of usage and attitude surveys with some focus groups,” says the company’s Mido Chisty. “We want to find out more from the consumer side, the key drivers for fruit and vegetable consumption. This will enable us to make decisions based on real consumer data.”