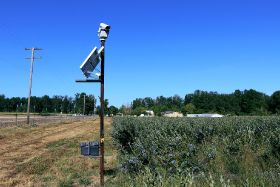 The lasers are solar powered

Blueberry producer Meduri Farms claims a new automated laser system installed at its farm in Oregon to deter birds has led to a significant increase in revenue.

Farm operations manager Justin Meduri says bird damage at the 68ha farm resulted in the loss of approximately 25 per cent of the overall potential crop volume, worth around US$100,000 a year.

The automated laser, developed by Agrilaser Autonomic and deployed by the Bird Control Group, takes advantage of a bird’s natural instincts. Birds perceive an approaching laser beam as a predator and take flight to seek safety.

Today there are around 6,000 of the systems in use around the world.

“Previously we had to work hard to keep the birds away. Last year before the lasers, we experienced the highest damage incurred by birds ever,” said Meduri.

“Now with the lasers, we don’t even have to worry about it - we simply have no issue anymore.”

According to research done by numerous US universities, the country’s fruit growers lose tens of millions of dollars each year as a result of birds damaging crops and ineffective bird repelling methods.

Oregon and Washington have the biggest blueberry crop damage caused by birds per hectare. In Oregon it is calculated at US$11,238,095 for the entire state.

Bird Control Group serves customers in aviation, agriculture, industry, oil and gas, recreation and real estate. It operates in more than 75 countries worldwide with offices in the US and The Netherlands.

“In a world with increasing demands for food, energy and mobility, effective and long-lasting bird control is crucial,” the company said.

“[We] provide innovative products to keep birds at a distance from commercial activities, ensuring a safer working environment and a highly effective way of damage prevention.”