At this week’s Fruitnet Forum South-East Europe, the region’s apple and berry producers were advised to diversify, collaborate and get organised to achieve export success 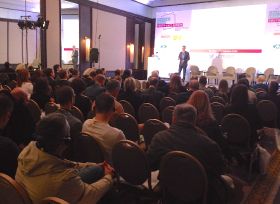 Through diversification and collaboration, south-east European growers can thrive – that was a recurring message at Fruitnet Forum South-East Europe, which took place this week in Belgrade, Serbia.

The region’s reliance on the Russian market – 94 per cent of Serbian apples are exported to Russia, for instance – was identified as a major risk factor for the future.

The FAO’s Andriy Yarmak asked delegates whether they thought Russia could afford to lose Serbia as a supplier. The recent example of Poland, banned from the Russian market along with the rest of the EU and the US, highlighted the fact that nothing could be ruled out.

Meanwhile, massive investments in apple production in Russia itself, as well as in Central Asian countries like Uzbekistan, are serving to ramp up competition on the market, necessitating swift action from Serbian producers to diversify their markets.

Yarmak used the example of Moldova as a country that has actively improved the quality and presentation of its apples since the Russian ban, and is now exploring south-east Europe for growth.

Diversifying in terms of both markets and varieties would equally make Serbia a better investment prospect, according to Yarmak.

“If you’re just one of thousands of growers of apples, producing the same variety as everyone else, with nothing special or unique, investors won’t be interested,” he told delegates.

The most dominant apple variety in Serbia remains Idared, but new technologies and new orchards have spawned the production of new varieties like Gala and Braeburn, according to Julka Toskic of Serbian marketer AgroBrand.

Faced with Russia’s increasing food dependence, Toskic revealed that Serbian exporters were eyeing alternative markets like the UK, not just for apples, but also berries.

She recommended collaboration, in the creation of a national or Balkan brand and in the organisation of promotions for Serbian fruit, in order to achieve export success.

Fred Douven of Netherlands-based berry specialist ABB Growers went a step further, urging the region’s blueberry growers to get organised and start communicating and working together. “Otherwise,” he warned, “you will not survive.”

Caslav Maksimovic, of Serbian grower Maksimovic Brothers, agreed, suggesting that more trust was needed in the region. “People do not trust each other enough,” he said. “There needs to be more cooperation. But we need guidance before establishing a national or regional brand. We need to get organised first.”