Efforts are underway in Greece to bring new grape varieties into production, including both seeded and seedless varieties 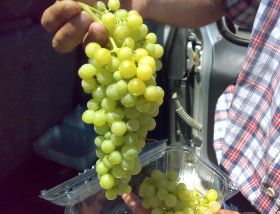 Ahead of the new grape season, Greek exporters face a major challenge in developing new varieties. According to George Frangistas, managing director of exporter Gefra, the sector in Greece is in turmoil.

“All concerned parties, including growers, packers, agronomists and the authorities, realise that Greece is overdue for varietal development,” he told Eurofruit. “Due to a multitude of limiting factors, it is no easy task to make the necessary steps toward this goal.”

Despite the challenge ahead, changes are currently being made, he revealed. “Regarding seeded varieties, we are seeing a resurgence in the north, as growers find welcoming markets in eastern Europe and benefit from high yields, low production costs and weather-resistant crops,” he said.

As for seedless varieties, efforts are underway with new patented varieties, he said, with the main focus on Crimson. “This variety has gone from 300ha in 2011 to 1,000ha in 2017, primarily in northern Greece, thus extending the late season to October and November.”

Greek exporter Proto is expecting the first volumes of its new Arra varieties this coming season, according to export director George Kallitsis.

“Our growers have been planting them on an experimental basis,” he said. “Their success will help us to decide whether or not to plant more. We also produce over 1,000 tonnes of Crimson, which we will target at the European market, including the UK, Netherlands, Germany and Scandinavia.”