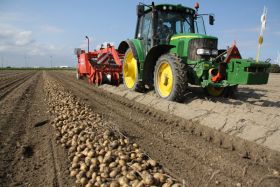 Dutch potato cooperative Agrico says it has managed to expand its market share “in all markets” as prices for seed potatoes continue to improve towards the end of the current season.

With strengthening demand for chipped potatoes (French fries) in north-west Europe and a good balance between supply and demand in overseas markets – despite certain political and financial challenges – the group informed its member producers that the 2017 harvest would generate an average benchmark price of €260 per tonne for all sizes and classes, higher than originally anticipated at the start of the current commercial campaign.

“At the beginning of the season, at the transition from the old to the new harvest, it became clear that the supply of ware potatoes within the European Union exceeded demand with a low price level as a result,” the company reported.

“This had an impact on the sales of seed potatoes in this region. In addition, the wet harvest conditions created a huge challenge to be able to ship the seed potatoes for the early destinations on time. Eventually all requested seedlings could be delivered.”

The European market’s rising appetite for French fries has certainly helped to bolster overall demand, it noted. “This sector is expanding further and Agrico's share in this is considerable.”

The European consumer market was very poor from the start, it added. “This led to a difficult sale of that part of the seed crop which had to be sold as fresh. Agrico presents a 28/on price and therefore this part of the harvest is also part of the payout price.”

Managing director Jan van Hoogen said the group was satisfied with the latest result: “After a hesitant start to the season, we have succeeded in serving all markets well. This allows us to present our seed potato growers with a nice indication price."