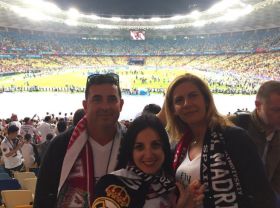 A customer and distributor of biofertiliser company Asfertglobal were flown to Kiev on Saturday to watch the final of the UEFA Champions League after winning the Portuguese multinational’s prize draw.

Asfertglobal launched its Champions promotional campaign at the last edition of Fruit Attraction, inviting Spanish distributors and their respective clients to enter the draw for two tickets to Europe’s most hotly-anticipated football event of the year, pitting Real Madrid against Liverpool.

The main objective of the promotion was to reward the loyalty of Asfertglobal’s clients by means of a simple participative mechanism. Mazarrón-based Agrosirio was the winning distributor, with Celestino Vera chosen as Agrosirio’s winning customer.

“It was a really once-in-a-lifetime experience, from the atmosphere of the fans to the game itself,” said Asfertglobal’s marketing manager Manuela Cordeiro, who accompanied the two winners to the Ukrainian capital.

“I was delighted to be able to fulfil the dreams of two of our clients who, as far as we are concerned, are the real champions.”