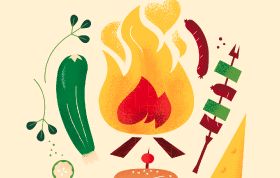 Swedish consumers are apparently incorporating more vegetables into their summer diets, with growing interest in healthy eating buoyed by a recent period of fine, warm weather.

That’s according to leading Swedish retailer ICA, which has revealed sales of vegetables, watermelons and sweetcorn cobs increased dramatically in May as people fired up their barbecues.

“The nice weather definitely affects our eating habits,” explained Paula Frösell, a dietician at ICA Sweden. “More barbecues and eating cool snacks like watermelon and ice cream. Another positive trend is that we have added more vegetables to the grill. Previously, meat has dominated, but there is an increased awareness of the health benefits associated with a more varied diet.”

According to ICA’s latest annual Grill Report, twice as many consumers surveyed this time around compared with the previous year said they would prefer to barbecue less meat.

Around 54 per cent, including 63 per cent of women and 35 per cent of men, said they intended to barbecue more vegetables.

The retail chain’s corn cob sales, for example, were up 63 per cent year-on-year during the four weeks to 28 May.