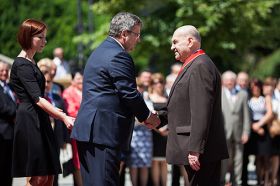 Professor Eberhard Makosz, a leading horticultural academic who was instrumental in the modernisation of Polish apple orchards during a career spanning almost half a century, has died at the age of 86.

According to a report on Polish grocery trade website Portal Spozywczy, Makosz was an icon of Polish fruit-growing, a renowned teacher and, as honorary president of Poland’s Society for the Development of Dwarf Orchards, a key player in the global fresh apple industry.

As head of the society’s board from 1994 until 2018, Makosz reportedly led a major transformation of Poland’s fruit production and in particular its apple orchards, helping spread awareness of new and more modern production techniques from around the world.

In 2012, Poland’s then president Bronisław Komorowski presented Makosz with the Commander's Cross of the Order of Polonia Restituta, in recognition of “outstanding achievements in scientific and research work for the development of fruit growing”.