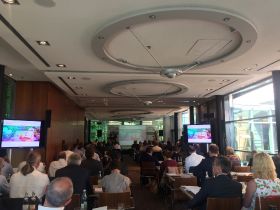 A packed room for the Freshfel conference

Changing consumer purchasing habits and the digital economy was the theme for this year's annual conference of European fresh produce association Freshfel Europe, which took place on Friday 8 June at the Movenpick Hotel in Hamburg, Germany.

Setting the scene, Andreas Bruegger of DFHV and Philippe Binard of Freshfel pointed out that digitalisation was one of the top priorities for the fresh produce industry, with its impact already widespread and investments being made throughout the supply chain as companies try to adapt.

“Look at the impact globally of digitalisation,” Bruegger outlined. “We are seeing the implementation of robots, growth in online retail, consumer habits changing. The question is, how can we keep in touch?”

Heike Schulz, co-founder of Zukunft Des Einkaufens, spoke about consumer engagement and the methods companies must adopt to tap into the mindset of the digital generation.

“Our society is changing, the way we work, live, commute, spend our free time,” she told delegates. “We are more dynamic, connected, with the internet no longer a room you go into – it is all around us. This shared economy has changed our mindset.

“We are moving beyond emails and SMS, and communication between company and consumer needs to be quick, fluid, transparent and through a number of different channels,” Schulz explained. “Some 62 per cent of Millennials, for example, are more loyal to brands that use direct messaging.”

She also championed the use of social media and web blogs, the latter being a medium that still has relevance.

“You need to be present in the same social media channels as your customers, although which platform depends on your purposes and goals – you must be selective,” Schulz confirmed. “Also, web blogs are not dead because they allow you to have your own content hub. In fact, a company that blogs – be that an employee, CEO or product/service blog – gets 97 per cent more inbound links.

“Make sure you are telling stories, communicating and informing,” she concluded.

Consumer behaviour and perspectives was the focus of a session lead by Dr Gunter Hirschfelder of Regensburg University, who presented the results of a study on purchasing habits.

“No industry has as bright a future as the fruit trade, but you must do the right things to grasp the opportunities you have,” said Hirschfelder. “Look at our statistics, where 93.6 per cent of respondents to our survey said that fruit and vegetables were crucial to their diet. The great thing is, many popular products like bananas, berries and apples already fit into the ‘on-the-go’ culture that is becoming increasingly prevalent.”

He outlined how important purchasing factors included taste, health, value and even packaging, while emphasising that the majority of buyers still purchase at the supermarket as opposed to online or even at discounters.

“Packaging, or non-packaging in some cases, has its value when it comes to consumer purchasing decisions,” Hirschfelder confirmed. “Sustainability now touches our everyday lives, and these considerations are being integrated into shopper behaviour.”

The power of regionality in fresh produce and shopping as an ‘event’ would remain important to consumers moving forward, he added.

“The fruit trade needs to reposition itself as we move forward,” he concluded. “The rise of e-commerce calls for trade with good communication, although local remains important and ‘digital-free’ havens will still exist.

“There will be a change in demographics, as the rise of single-person households means more meals will become snacks, and with health only getting more important you should continue to highlight the health benefits of fresh products.”

Bert Graafsma or PWC in the Netherlands also presented the results of a survey, this one taking in 22,000 consumers across 27 territories worldwide, as he argued for the future relevance of bricks and mortar grocery stores.

He highlighted that only 4 per cent of shoppers buy online globally, despite enormous growth in recent years, with 40 per cent of respondents to his study saying they still want to shop in physical stores.

“Groceries are still in ‘stage 1’ of online adoption, unlike items such as toys and clothing (stage 2) or music, which is now almost exclusively bought online (stage 3), Graafsma told delegates. Groceries rank very low in terms of online purchases, which tells you there is real growth opportunity. Indeed, 50 per cent of respondents said they would shop online in the next 12 months. Online is still niche, but there is much room to expand.”

He used the Netherlands as an example of a market where bricks and mortar shopping is still very relevant for consumers, due to a close proximity to stores, the low presence of Amazon and the value a physical store brings, such as personal service, knowledge and greater availability. He also noted that the rise of ‘Generation Z’ would mean more purchases online through social media platforms, as they have “less loyalty”.

“We believe bricks and mortar retailing has a place in the future market, as it adds value in terms of experience and knowledge, but there is no doubt online retailing will continue to grow,” Graafsma concluded.