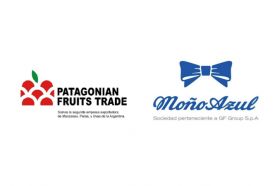 According to reports in the national press, senior managers at Patagonian Fruit Trade (PFT) are negotiating with the Orsero family to take over crisis-hit Moño Azul, giving it control of one of Argentina’s most iconic fruit brands.

Like many companies in Argentina’s apple and pear industry, Moño Azul has been hit by rising energy costs and a decline in profitability that has forced hundreds of producers to abandon their orchards.

However, given Moño Azul’s precarious financial situation, the most likely outcome of a deal would involve a sale of its assets to PFT.

According to sources involved in the talks, a confidentiality agreement between companies prevents official details of the negotiations being disclosed.

However, it is known that PFT’s accountants have been pouring over the balance sheets of Moño Azul at is offices in Guerrico.

When contacted by Río Negro, PFT said: “We are not going to talk”. But it did confirm that this was the fourth time in the last three years that it had been in negotiations with Moño Azul.”

Moño Azul is one of the biggest casualties of the crisis engulfing Argentina’s topfruit sector. Shipments from the port of San Antonio Este, the main exit point for regional apple and pear exports reflect this: during the 2005 season around 39,000 tonnes of fruit were shipped from the port while last season this had fallen to 11,900 tonnes.

A takeover by PFT would be the culmination of a divestment process started by Moño Azul four years ago which has seen the sale of off a number of farms and packhouses in a bid to stay afloat.