New venture, which represents 20 per cent of Italy's apple production, could expand to other product categories in future 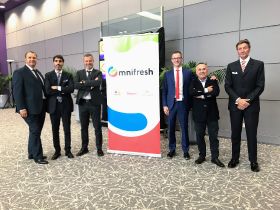 Starting this season, the joint venture will offer a range of apples from its combined production of more than 400,000 tonnes, including licensed varieties Ambrosia and Kanzi.

According to its founding members, that range is likely to be expanded and upgraded in the coming years, while other products including kiwifruit, berries, citrus and grapes could also be added to the mix in due course.

“This company can grow and deliver varieties that fit the consumer demand in Asia,” commented Kevin Au Yeung, Omnifresh’s Asia market manager, who will head up the group’s activities from Hong Kong. “Market demand here for good-quality, sweet apples continues to grow .”

Paolo Carissimo, president of RK Growers, said the creation of Omnifresh would enable the partners to connect with customers more directly, with a single voice. “At the core of Omnifresh is our own commitment to supplying Asia with the kind of apple taste and flavour its consumers demand,” he added.

The partnership’s apple range covers a number of taste profiles from sweet to sour, but at the heart of the project as far as Asia is concerned is Ambrosia, a club variety grown mostly in Piedmont that is apparently generating strong interest among apple buyers in the region for its sweet flavour.

Production in Italy is currently around 25,000 tonnes this year, but with more new plantings on the way, that figure is expected to rise to around 40,000-45,000 tonnes in the next few years.

“Ambrosia demand is exceeding supply,” explained Au Yeung. “It’s seen as an upgrade on Fuji, because it doesn’t oxidise as easily. Available from October to May, it also has a slightly longer marketing season than Fuji, which is November to May.”

Other apples are reportedly in the pipeline, with talk of around 20 varieties currently being trialled by growers linked to Val Venosta, Rivoira and RK Growers.

These are understood to include Kissabel, a trio of red-fleshed apples, as well as Crimson Snow (white flesh, red skin) and Yello (yellow skin).

“We are aiming to release one new sweet apple variety every year for the next ten years,” Au Yeung revealed, with Val Venosta commercial director Fabio Zanesco revealing the group has “another 20 varieties in testing”.

In the meantime, the possibility of adding other fruit categories to the Omnifresh operation is a very real one, according to RK Growers export manager Giacomo Nocentino.

“In future, we could also add kiwifruit – for example our yellow kiwifruit variety Dorì – as well as berries, citrus and our Arra table grape varieties,” he noted. “Omnifresh will act as an umbrella for these excellent products.”