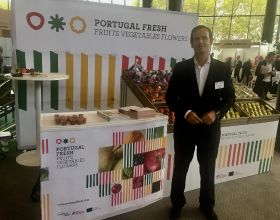 Exports of Portuguese fruits and vegetables to Spain are growing at an annual rate of 10 per cent and could reach €500m by 2019, according to Portugal Fresh.

Spain is Portugal’s biggest trading partner and the most important consumer of Portuguese fruits and vegetables, absorbing 30.5 per cent of the country’s export volume.

“If we maintain the same average annual growth rate that we’ve been seeing since 2010, which is around 10 per cent, we can aspire to reach that figure very soon,” said the CEO and chairman of Portugal Fresh, Gonçalo Santos Andrade.

For the 8th year running, Portugal Fresh – the Association for the Promotion of Fruits, Vegetables and Flowers from Portugal – will take part in Fruit Attraction, with a presence of 42 companies, associations and partners at the show.

Between January and July of 2018, Portuguese fruit and vegetable exports fell by 1 per cent as a consequence of the prolonged drought which delayed the start of the season. Sales to Spain during the same period fell by 0.2 per cent, standing at €223.4m.

However, Andrade believes that performance will not undermine industry efforts to reach €2bn of exports by 2020.

Portuguese fruit and vegetable exports increased by 12 per cent to €1.472bn in 2017. After Spain, France, the UK, Netherlands and Germany are its biggest markets.