Throughput down at port of Hamburg 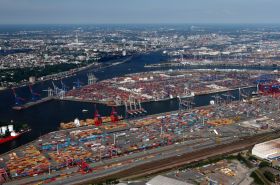 For the first nine months of 2018, the port of Hamburg said that it achieved total throughput of 100.8m tonnes, corresponding to what it desribed as a "modest downturn" of 3.4 per cent - with the rate of decrease slowing in the third quarter.

Down by 6.6m TEU, or 2.4 per cent, container throughput in the first nine months of 2018 was slightly below the previous year’s.

Around 58 per cent of the fall was caused by a drop in the number of empty boxes handled, the port noted.

Railborne container transport achieved a "distinct advance" of 4.3 per cent in the first nine months of the year, with a total of 1.8m TEU – 20ft standard containers – transported by rail between the port and inland intermodal terminals.