Precipitation aids for citrus and vegetable producers in Murcia, but damages in Valencia region could top €100m 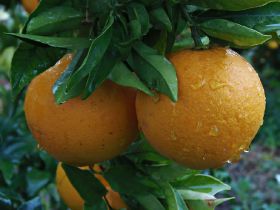 Growers in Murcia say the heavy rains that have fallen on much of the region in recent days will bring a positive effect on citrus and vegetable production after months of drought.

Nevertheless, the rainfall is reported to have caused serious localised damaged to agricultural structures, particularly in the Campo de Cartagena and Valle del Guadalentín areas.

Agricultural union ASAJA Murcia warned that the excessive rain could cause the appearance of fungal diseases in horticultural crops in these zones.

Producers in Valencia were also assessing the impact of the torrential rain that has fallen across much of the region in recent days, affecting citrus, kaki and vegetable production.

Many fields remain underwater leaving producers unable to harvest their fruit and raising concerns over “pixat” and fungal skin problems due to the excessive moisture.

AVA-Asaja said although it was too early to put an accurate figure on the extent of the losses, initial estimates suggested these would be “at least €70m and possibly as high as €120m”. It suggested that between 250,000 and 500,000 tonnes of citrus has been lost.

With an estimated 4,500ha of citrus farms still under water, Carles Peris of the Unió de Llauradors i Ramaders union explained that the accumulation of water in the roots left citrus and kaki trees vulnerable to asphyxiation.

Peris said the extent of the damage would depend on how weather conditions evolve in the coming weeks: a period of low temperatures and dry weather would lessen the impact of the rain while high temperatures and humidity would worsen the losses.

On the plus side, the rains have replenished depleted reservoirs, and growers say they will benefit late season citrus harvested from January onwards, helping to boost quality and sizes.

The rains have come at a critical moment for citrus producers, who were gearing up for the sales push ahead of the Saint Nicholas celebrations of 6 December when oranges are traditionally given as gifts in countries like the Netherlands.