Global grocery markets are forecast to generate an additional US$1.9tr by 2023, with Asia leading the way 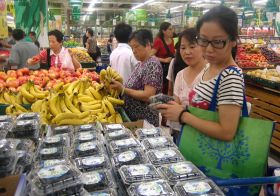 The leading 20 global grocery markets are set to generate an additional US$1.9tr in sales, growing by 28 per cent between 2018 and 2023, new forecasts from global research organisation IGD predict.

According to the group, nearly half (44 per cent) of the extra sales will be created in Asia, which will add more than Africa, Europe and Latin America combined.

Asia as a region will contain seven of the world’s largest grocery markets by 2023, IGD added, and these will have a combined market size of US$3.8tr.

IGD predicts Asia will see the strongest real growth – from population growth or consumers spending more on grocery – and is set to account for 47 per cent of the additional spend between 2018 and 2023.

After Asia, the growth opportunities provided by Latin America, with the exception of Argentina and Venezuela, and North America are likely to provide a number of opportunities for retailers and manufacturers between now and 2023. Looking at the underlying drivers of growth in each region IGD expects inflation to be the most significant factor driving growth over the next five years.

“China’s grocery market is expected to continue growing over the next five years, establishing itself as the largest grocery market globally," said Nick Miles, head of Asia Pacific at IGD. "While growth varies between markets across Asia, countries such as India, Indonesia, Pakistan and Vietnam will continue to grow in importance for retailers and suppliers given the large populations, improving levels of GDP per capita and the development of modern trade. Retail partnerships have also in some cases helped retailers accelerate growth ahead of the market, and we expect more of these relationships to emerge and develop over the next 12 months.

“Grocery growth in Asia continues to benefit from a rapidly growing middle class, the rapid development and adoption of new technology, improved infrastructure and logistics networks, plus improvements to retail standards," Mile continued. "Modern trade retailers continue to expand their store networks and improve existing operations. Meanwhile, traditional trade still plays a role, with mom and pop stores modernising their offerings and tailoring services to local communities. In countries like China and India this is being aided by online retailers such as Alibaba and Amazon.

“Across Asia the pace of development and focus of retailing varies by market," he added. "However, online is expected to be the fastest growing channel regionally over the next five years. Online grocery retailing is already well established in countries like South Korea, Japan and China and we expect the share of sales accounted for by channel in these markets to increase to over 10 per cent by 2023. While online grocery retailing is growing rapidly across Southeast Asia we expect it to still account for less than 2 per cent of sales in most markets in five years’ time.”

Commenting on growth in Europe, head of retail insight EMEA Jon Wright said: “Five key countries will stand out in the next five years – France, Germany, Russia, Turkey and the UK – and these are set to account for nearly two-thirds of all additional sales generated between 2018 and 2023. The continued strength of these markets will, therefore, dictate the growth outlook for Europe as a whole.

“Online and discount are set to gain the most share to 2023, with discount set to be the strongest gainer between them both," noted Wright. "Several factors are set to help maintain the channel’s growth, including expansion from regional leaders such as Aldi and local operators like Biedronka, and improvements in retailer offers as we’ve seen with Salling Group-owned Netto. We’re also seeing growth through more targeting of missions, as with Dia’s to Go format, and an expansion of ranges to include more organic and niche products."

On North America, IGD Canada programme director Stewart Samuel said: “The US market heavily influences the region’s performance given its size. The outlook is for a fairly low growth scenario, meaning that retailers and manufacturers need to focus on the growth opportunities provided by the online channel and discount retail, as these will be the fastest growing channels over the period.

“The North American market is seeing significant investment in online grocery retail, particularly in terms of supply chain and fulfilment," Samuel added. "There is a big focus on making the channel more efficient which involves lots of testing of different solutions. Albertsons and Ahold Delhaize have partnered with Takeoff Technologies for hyperlocal fulfilment, Kroger partnered with Ocado. These investments suggest that retailers view the channel as being materially more important in the future.”