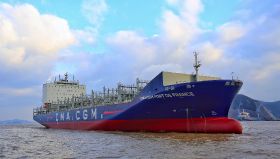 Shipping group CMA CGM has announced that it has taken delivery of the CMA CGM Fort De France, the first of an order for four container ships dedicated to the French West Indies trade.

With a capacity of 3,500 TEUs and a length of 219m, the vessel stands out by its draft which is adapted to the West Indies ports.

It is also equipped with a large number of plugs for reefer containers which allow the transport in optimal conditions of perishable goods such as bananas; 850 such containers can thus be installed on the ship.

The group will take delivery over the spring and summer of 2019 of three other vessels with identical features: the Fort Royal, the Fort Saint Charles and the Fort Fleur D'epee.

This owned fleet will sail under the French flag and will be deployed in replacement of the existing “Forts” on the North Europe French West Indies line, a service linking Europe and Metropolitan France to Guadeloupe and Martinique, crossing the Atlantic Ocean in under ten days.

"With this modernised fleet, CMA CGM significantly increases its service to the French West Indies while maintaining its quality, its reliability and its regularity," the company noted. "The group thus demonstrates its commitment in favour of these overseas territories, particularly in favor of their economic development."

CMA CGM Group also renewed in November its transport contract with UGPBAN, the professional association of banana producers of Guadeloupe and Martinique, until 2026.

As a result, the company will transport 270,000 tonnes of bananas annually from the French West Indies to Dunkerque, their port of arrival in Metropolitan France.