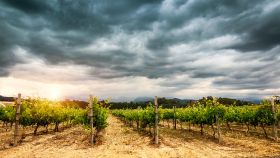 South Africa’s minister of agriculture, forestry and fisheries, Senzeni Zokwana, has assured the country’s farmers that land in productive use will not be seized without compensation.

“The minister did touch on concerns regarding expropriation without compensation,” says the CGA. “He reassured farmers that productive farms were not in any danger of being expropriated, but urged farmers to get involved in land reform and upliftment projects.”

One of the major issues which has surfaced in South Africa in recent times was clarification by the government of how its new policy of land seizures without compensation will be implemented.

The level of compensation is also still unclear – even in the case of productive land – and was not further clarified by the minister.

The CGA's Justin Chadwick says delegates to the Forum attended a Hortgro programme in Elgin which included workers, black growers and the Two-A-Day group.

“The range of corporate social responsibility programmes presented showed the commitment towards inclusive growth in the fruit industry," the CGA noted. "A visit to the packhouse illustrated the capital and technology intensive nature of the fruit industry, while the orchard visit highlighted the complex nature of fruit farming."

At the Service Delivery Forum later the same day Fruit South Africa told the delegation that the South African fruit sector was in a growth phase, with significant plantings in many fruit categories reaching maturity, resulting in increased marketable volumes during the next few years.

“It is essential that the industry and DAFF work together to gain, retain and optimise market access to ensure that this additional growth is marketed with reasonable returns back to the farm.”

Fruit South Africa also stated that protectionism was increasing around the world, impacting access to many markets. “Developed countries are using technical barriers to trade, while less sophisticated markets are using tariffs as a means of limiting trade.”

Minister Zokwana received some credit for leadership, particularly in visiting and trying to unlock market access issues in key South African fruit markets, such as Thailand, the US and China.

Fruit South Africa said this political will from the minister needed to energise the entire department if the industry is to benefit from the growing marketable volumes.

“Competitors are working hard to increase their market share – a new sense of urgency is required if South Africa is to remain competitive.”

The industry is capital and technology intensive, Fruit South Africa noted, and this means that the industry and government need to work closely with new entrants to supply them with the support and mentoring that will allow them to be successful.

It was also emphasised that the fruit industry is ready to enter public private partnerships to ensure that the volume increase results in inclusive growth.