At the midway point, the campaign is progressing in line with expectations 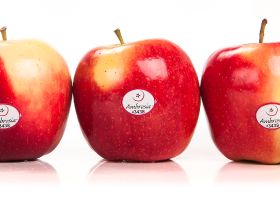 The 2018/19 Ambrosia apple marketing campaign is proceeding smoothly, with around 45 per cent of the 21,500-tonne crop sold as the season enters its central phase.

“In a challenging apple market due to the larger European production we can be satisfied with how the campaign has gone in the autumn, which has been in line with expectations,” said Marco Rivoira, executive manager of the Ambrosia Apple group.

Ambrosia apples are sold principally in Italy, Germany the Iberian Peninsula and Scandinavia.

“With the proliferation of club varieties on supermarket shelves, we’re focused on supplying an organoleptically excellent product, with the quality and taste to build consumer loyalty.”

The group said sales of organic Ambrosia were also advancing at a brisk pace, both in the European market and further afield.

In Spain, meanwhile, the variety’s roll out is being supported by various activities including tastings at point of sale, and a social media campaign.

The Ambrosia season is expected to end between the end of April and mid-May.