Producers must do more to improve their competitiveness, says Andalusian agriculture minister 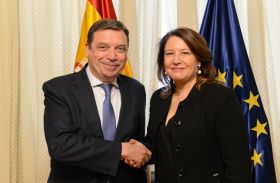 The Andalusian Minister of Agriculture, Livestock, Fisheries and Sustainable development, Carmen Crespo, has announced plans to draw up a global strategy for the citrus sector to shore up its stability in the market.

Crespo said the document would include measures related to production and trade, as well as wider issues related to import quotas and EU border controls, in a bid to tackle the low prices that have characterised the current campaign.

Although the market situation has improved somewhat in recent weeks, Crespo insisted producers should do more to “improve quality and reinforce investment in research and innovation in order to improve Andalusian production”.

Speaking after a meeting last week of industry representatives in Seville, the minister noted that oversupply was the main challenge facing the sector, and that this had been made worse by Spain’s production overlapping with that of other countries like South Africa at the beginning of the season.

The announcement came as a producer union in Valencia said this week that lemons were suffering a similar fate to oranges and mandarins. Unió de Llauradors estimated that around 26,000 tonnes of Fino lemons – the principal variety produced in the region between October and March – had been left unharvested this season due to low prices, causing losses of around €39m.

The union blamed overproduction (Spanish Fino output rose 14 per cent this season), and a sharp rise in imports from Turkey for the collapse of the market.

On Tuesday, the Spanish Congress was due to debate a motion called by Valencian party Compromís to demand that the European Union activate a safeguard clause in its trade deal with the Eastern and Southern African States to halt citrus imports.

However, South African growers insist that Spain’s woes are due to a combination of factors including poor organisation among producers, weak demand, climatic issues and smaller fruit sizes.

Justin Chadwick of the Citrus Growers’ Association pointed out that the volume of Valencia oranges shipped to Europe from South Africa in the last ten weeks of the export campaign decreased significantly last year, falling to 1.5m cartons compared with 2.5m cartons in 2017.

Chadwick insisted that collaboration, not confrontation, was the way to improve the market situation.