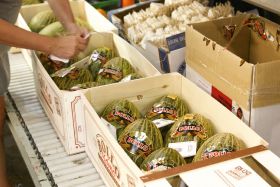 According to a report in El Confidencial, Magnum Industrial Capital Partners, the private equity fund of Angel Corcóstegui and Enrique de Leyva, is in the final stages of talks to acquire Spain’s biggest lettuce producer, Agrupapulpi.

Almería-based Agrupapulpi was founded some 40 years ago by Francisco Belmonte Navarro and Bartolomé Soler to grow and market vegetables produced in southern Spain. Today the company has 1,000 employees and a turnover of approximately €65m.

The paper reported that Magnum will pay between €80m and €90 million for a majority stake of Agrupapulpi which will remain in the hands of the current managers.

However, Bollo's managing director Jose Vercher denied that a takeover was imminent. "There's a lot of interest from funds in buying up good companies in the fruit and vegetable sector. ProA Capital's is one of many offers that we have received but for now we have no interest in selling the company," he told Fruitnet.

This would not be ProA Capital's first foray into the fruit and vegetable arena. In 2016 the venture capital firm acquired Fruselva, a manufacturer of juices and purees, and the following year it acquired leading table grape supplier Moyca.

Owned by the Vercher family, Valencia-based Bollo International is valued at around €150m and has an operating profit of around €20m.

ProA Capital was also rumoured to be one of about ten private equity funds competing for Agrupapulpi.

Other examples of the growing interest fresh produce companies include Miura’s 2016 acquisition of citrus giant Martinavarro and Cinven’s acquisition of a majority stake in Navarra-based breeder Planasa in 2017.