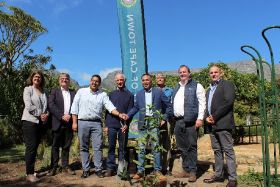 Over the years South Africans have recognised the history of fruit trees in the country, and have tried to preserve early varieties planted at the Cape.

Fruit trees and the development of the South African fruit industry have always been closely linked to the arrival of European settlers in the Cape region. Those who have keenly researched how those trees got to the Cape, or where and when they were first planted, have over the years contributed to the re-establishment of early cultivars in what is known as the Company’s Garden, introduced soon after 1652.

The most recent effort has been to trace and re-establish the first apple tree ever planted at the Cape. Recently, a cultivar called the Witte Wijnappel was planted in the Company’s Gardens – on the day in April when this tree was first recognised at the Cape in 1662. The South African apple industry also marks this date as its birth in South Africa.

The two men mainly responsible for finding the Witte Wijnappel again, are Tru-Cape quality assurance manager, Henk Griessel and his colleague, Buks Nel, who is the company’s new variety expert. They also published the history of apples in the form of a book entitled ‘Apples in the Early Days at The Cape’.

After a period of exhaustive research, the duo tracked down the Witte Wijnappel tree in the Netherlands.

Budwood of the Witte Wijnappel from which a new tree could be grown was imported, and after a considerable period in quarantine, was planted again at the Cape.

‘"This is a remarkable story and the City of Cape Town who is responsible for managing the Gardens is honoured to be a part of it,” said Councillor Zahid Badroodien, mayoral committee member for community services and health.

While the Witte Wijnappel is of historical significance, there is no reason to expect that it could show a revival as industry cultivar. It has also got a far more famous partner in the Gardens in the form of the Saffraan Pear tree which is recognised as the oldest fruit tree in the Gardens. The big debate always move to which is the oldest tree ever planted in the Gardens. This would give that sector of the fruit industry bragging rights as the father of all trees or vines.

There is the first citrus tree planted in the Gardens around the same time. To complicate things even further the oldest fruit in the Gardens may not be a tree, but could be a vine. It is known that the first wine was pressed at the Cape in 1659, some years before Witte Wijnappel.

What is significant is that this wine was made from two grape varieties, Steen and Hanepoot. Cape Hanepoot, as it is more commonly called, arrived at the Cape within two years after the settlement started in 1652. It is know that it was picked and that early settlers served it on their tables even before the first wine was made.

To close the argument, table grape industry members would claim that Cape Hanepoot is still today grown at the Cape and is sold in one of Cape Town’s suburbs, Constantia. It has survived for around 360 years and still has commercial value. It is much loved by Capetonians, other than the Witte Winappel which will perhaps only have pure ‘museum’ value.

It is clear that the Cape Hanepoot deserves a spot in the Company Gardens. But then, in present day South Africa there is not much regard for history that relates to the early days of the settlement, especially as it relates to the early settlers who came from Europe. It has become politically incorrect to talk about the times of the settlers because it is associated with a Colonial past. It is a crazy world!