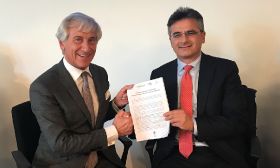 Paolo Bruni of CSO (left) hands the letter to Giuseppe Blasi, head of international and European policy and rural development at Mipaaft

Fresh produce industry leaders in Italy have called on the government to use any means at its disposal to boost the country's standing in third countries, an area which many regard as critical to the future survival of Italy's fruit and vegetable export business.

In an open letter to the country's Ministry of Agricultural, Food and Forestry Policies (Mipaaft), members of the Association of Italian Cooperatives (ACI), apple industry body Assomela, national fresh produce export association Fruitimprese, producer association Italia Ortofrutta and market research agency CSO and demand that the government 'pull out all the stops' and address a lack of progress on opening new markets.

During a meeting attended by several of Italy's leading fresh produce professionals at the Macfrut trade fair in Rimini last week, data published by CSO Italy confirmed what many in the business have known for longer than they would care to remember: Italy's fresh fruit trade is struggling to keep up with competing nations when it comes to export growth and has failed to respond adequately to the 2014 closure of the Russia market.

The news appears to have sparked a handful of the country's produce organisations into action, although there will be many who suspect this latest episode of positivity will be overshadowed by the same lack of progress that has blighted previous attempts to coerce decision-makers into action.

At the end of the Macfrut meeting, during which representatives of the Italian apple, pear, kiwifruit, table grape and citrus categories spoke effectively with one voice on what has the makings of an existential crisis in the Italian trade if the rate of progress on opening new markets cannot be accelerated, the letter was handed to Giuseppe Blasi, head of international and European policy and rural development at Mipaaft.

Blasi, for his part, has reportedly promised to bring the document to a wider audience and in particular to the attention of those on Mipaaft's fruit and vegetable committee by the end of this month. Whether that has the desired effect remains to be seen.

The comparative progress made by Italy and a number of other European countries throws the former's struggle into stark relief.

As CSO director Elisa Macchi observed, the Netherlands and Belgium have managed to open markets like Brazil, China and Mexico for their pears, even as their annual production has jumped from about 320,000 tonnes in 2000 to roughly the same volume as Italy, around 700,000 tonnes.

Similarly, the country finds itself under far more intense pressure as a result of recent expansion for Polish apples, Greek and New Zealand kiwifruit, and Spanish citrus and table grapes, Macchi said.

"Speeding up negotiations between the Italian state and China to unblock the situation [for pears] is fundamental," said Marco Salvi, president of Fruitimprese.

"We are also working on other important markets, but we must hurry because our competitors have already arrived and they are eroding our market share considerably."

Alessandro Dalpiaz of Assomela was similarly critical: "There are many negotiations ongoing when it comes to third-market access for our apples," he noted. "Despite great commitment, everything then stops without any real reason. We have two dossiers just waiting for a signature in Taiwan and Vietnam, where our French and Polish competitors are already present."

Perhaps of even greater concern for the Italian fresh produce sector is that suggestion, also made during the meeting, that it might even be losing market share on its own doorstep.

""We are at a turning point," said CSO president Paolo Bruni, who chaired the meeting. "At this moment, the evidence points to a major contraction in Italian exports but above all we are under strong pressure from our main competitors in the domestic market."

For more than a decade, Italy's need for growth in emerging export markets has been apparent, yet only a handful of products – kiwifruit and oranges in China, for example – have achieved the kind of trade access necessary for such expansion.

Bruni suggested that various institutions and interest groups across the Italian fruit and veg industry would need to work more closely in order to produce the various pieces of paperwork necessary when forging trade protocols with other countries.

"It is clear that new outlets are needed, otherwise we will not be able to guarantee our product's competitiveness," he continued. "Italy has cards to play: the value of its production is recognised and we lead the world in terms of food safety, but without outlets in new markets, we cannot grow."