World Avocado Organization predicts that by 2027 European volume will match consumption in US, where almost 1.1m tonnes were sold last year 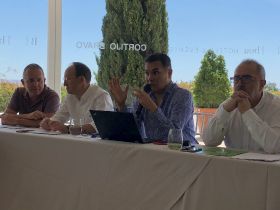 Avocado consumption in Europe is on course to reach the same level as in the US in the next eight years, according to global promotional body the World Avocado Organization.

Speaking in Málaga at the association’s first media event in Europe since its launch in 2016, chief executive Xavier Equihua said there was huge potential to reach new markets in the continent, as well as boosting consumption in already developed ones.

Both the US (he world’s biggest market for avocados) and Europe (the second largest) have enjoyed rapid incremental growth in avocado consumption in the past 15 years.

“Growth in the European market is rapid and very organic, but it’s really only the northern countries that are eating more, such as Germany, the UK, and France – even though it’s already a well-developed market,” said Equihua.

“Of course, that will depend on production volumes because there are only so many countries that produce avocados, and demand for avocados is increasing every year.

“Why is it increasing? It’s very simple – it’s one of the few fruits or agricultural products that is versatile, tasty and healthy. It has the three important ingredients for a great product.”

Equihua added that the fruit has the advantage of being well suited to vegetarian and vegan diets as a protein-rich substitute for meat.

While he sees China as the market with the greatest potential for avocados in the long term, he emphasised that boosting consumption in Europe is the WAO’s priority for the next few years.

“Europe is an amazing market because the 650,000t sold in Europe last year were consumed in about ten countries, so what about the other 18 countries in the EU?

“It’s a question of educating people in how to eat avocados. That’s why Eastern Europe and Russia are so interesting. They’re really interesting places for growth.

“The southern markets are also promising – the per capita consumption of avocados in Spain is 1.2kg per person, which is very low, and in Italy it’s about 200g, which is nothing.

“Just here in the European market the potential is amazing, and it’s the same in the UK. If you get out of the cities people aren’t eating many avocados.”

According to Equihua, the reason that Spain is still a small consumer of avocados, despite being Europe’s biggest only major producer of the green fruit, is that the diet is very orthodox.

“If you see what Spanish people eat every day, they’re eating Spanish food, so how do we introduce avocado into the Spanish diet? That is the challenge,” he said.