Dole to pull out from Honduras 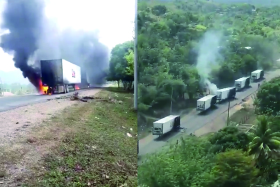 Dole is to move its banana operation from Honduras to Guatemala and Mexico due to growing civil unrest.

Military officials say around 30 of the multinational’s trucks have been burned and looted by protestors targeting symbols of US power in demonstrations against the US-backed president of the Central American nation, Juan Orlando Hernandez.

The attack took place in early on Sunday near the village of Guadalupe Carney, some 330km from the capital, Tegucigalpa, senior military official Fernando Leiva said in an interview posted by Honduran media.

“So far we have 32 burned containers and practically everything that was in those containers was looted,” the chief of the Honduran military said in an interview with Diario Colón Hn.

Dole’s cessation of operations was confirmed by the leader of the Federation of Farmers and Ranchers of Honduras (FENAGH), Leopoldo Durán.

Durán said Dole had been planning to expand its operation in Honduras by 2,000ha, leading to the creation of thousands of new jobs.

For several weeks Honduras has experienced mounting protests from a movement led by teacher and doctors’ unions who are demanding the resignation of President Hernandez.

Hernandez has faced growing opposition since changing the rules to allow him to run for a second term in 2017.

On Friday protesters torched the gate of the offices of the US embassy in Tegucigalpa on, placing tires they burned with fuel, officials of the Honduran Fire Department said. and witnesses.