The banana giant has provided an update on efforts to reduce its global impact on the environment, including partnering with local farming communities 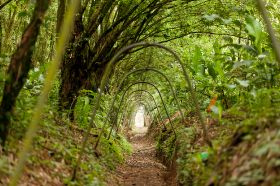