Compac to the rescue for Apofruit 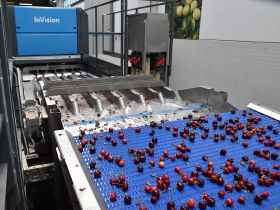 Despite a poor start to the 2019 cherry season, Italian cooperative Apofruit has revealed that it was able to save the crop after investing in an InVision TotalView cherry sorting platform from Compac.

In 2018 the cooperative invested in Compac’s InVision technology for its cherry processing line at Apofruit's plant in Vignola and for sorting organic apricots, peaches, nectarines and citrus fruit at its plant in Scanzano Jonico.

The system was installed in time to rescue a cherry campaign that got to a "terrible start", with heavy rains that compromised the quality of the crop.

However, Apofruit said that with the InVision TotalView platform, it was able to recover good fruit even from the poor lots it received in the early weeks, resulting in a positive outcome for the cooperative, which closed the difficult season profitably and was able to support its farmer members.

The InVision TotalView platform delivers high accuracy of defect grading, and particularly stands out for its ability to grade nose cracks caused by rain, run bad lots faster and recover good fruit from these lots.

“The difficulties of this year’s cherry season were very obvious to everyone, and there is no doubt that Compac’s InVision technology contributed to mitigating the dramatic consequences by enabling us to process fruit lots that we would never have been able to manage with traditional methods," said Claudio Magnani, Apofruit technical director. "If I had to sum up the advantages of this platform in one sentence, I would say it is the constant high quality it delivers that would be difficult if not impossible to achieve with the human eye.”