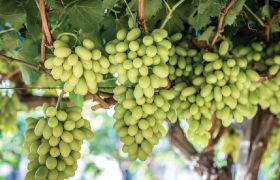 Spain’s HaciendasBio is looking to tap into growing demand in the premium organic fruit category with the introduction of exclusive varieties such as Arra table grapes and flat white nectarines.

The company is the only producer in Spain growing organic Arra table grapes, including Arra 15, a white seedless variety with large, cylindrical berries and crunchy, fleshy and juicy texture.

With more than 100ha of production spread over five farms in Almería, Badajoz and Seville it is able to harvest the variety from mid-June through to mid-November.

The company has also announced plans to launch an exclusive premium flat white nectarine on the European market. The fruit, developed by French stonefruit breeder Agro Séléctions Fruits (ASF), will be available from this winter.

The 12 varieties of Regal’in nectarines are characterised by their semi-sweet flavour, high coloration and aromatic and crispy flesh.

They are grown by the Nectarine Blanche Plate Association, a group of ten producers in France and Spain that between them cover the entire stonefruit production calendar. The group aims to have around 900ha of production by 2024, including 150ha of organic production.

HaciendasBio holds the exclusive license to grow the nectarines organically in Europe (except France) for the next five years.

HaciendasBio is Spain's leading grower and marketer of organic fruit and vegetables. Last year it produced 32,200 tonnes, 90 per cent of which was exported, mainly to Germany, Switzerland, France and the Netherlands.