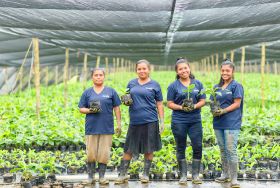 Chiquita has released a statement outlining how it is tackling the challenge of empowering women across its banana plantations in Latin America, highlighting the tools it is using to safegaurd women's rights and promote opportunities.

The group noted that it was working hard to ensure its guidelines, codes of conduct and tools eliminated violent or discriminatory incidents as far as possible, and that zero tolerance was shown to such acts.

"Gender equality is a significant challenge on the banana plantations of Latin America," the group outlined. "In this labour-intensive line of work, traditionally dominated by men and situated on remote farms, women are often particularly vulnerable to violence, discrimination, intimidation and sexual harassment."

One of the company’s key goals is to enable its employees, both male and female, to express themselves and draw attention to any inappropriate behaviour on its farms and, to achieve its aim of achieving gender equality and empowering its female workforce, Chiquita has created several "important and unique tools" to safeguard women’s rights and promote opportunities.

The first of these tools is the company’s helpline system, which is available for all employees every day for them to report, in an anonymous way, any discrimination or harassment complaint. The system is actively communicated and promoted from farm to farm by company representatives.

"This gives all employees the opportunity to raise any issues that affect them safely and anonymously and seek help quickly if needed," Chiquita epxlained. "The company also takes a zero-tolerance approach to retaliation against employees who report discrimination or harassment."

Another of the main tools Chiquita uses to pursue equality and empowerment is an IUF-COLSIBA-Chiquita agreement, in place since 2001. This agreement, which the company said was unique in the banana industry, promotes workers’ rights and, since 2013, also specifically protects women’s interests.

In particular, the agreement seeks to increase women’s employment opportunities and was the foundation for an awareness and information campaign to advance their technical skills, rights, and health and safety.

In 2013, the company drafted and approved an annex to the agreement, the ‘joint understanding about sexual harassment’, an additional safeguard that already been included in the company’s Collective Labour Agreement in Panama, Costa Rica and Honduras and is now being implemented in Guatemala.

Chiquita said that it was analysing gender pay or opportunity gaps throughout the organisation, and had plans in place to address these at the latest by the time of the next report in 2020.

"The company’s efforts have met with considerable success, and it has gained extremely useful experience in the process," Chiquita stated. "One substantial measure of its achievements is the increase in women working on its farms: currently, 17 per cent of Chiquita’s farm workforce are female and 21 per cent of its administrative positions are filled by women, an increase from 8 per cent of the workforce in Panama alone. Chiquita continues to assess its processes to identify how best it can promote the role of women throughout the company."