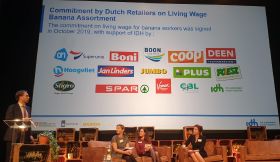 Dutch supermarkets have joined forces to ensure a living wage for banana workers in the international production chain.

The partnering retailers are aiming to reduce the gap between the currently paid wages and the living wage for their entire banana assortment by at least 75 per cent within the next five years.

The goal of supermarkets is, by 2025, to predominantly sell bananas that are sourced from plantations that pay a living wage to their workers.

To ensure this the retailers can use the Salary Matrix, made available by IDH, to calculate the difference between the current wages and the living wage. By using the tool, they can analyse current wages in the supplying locations of their total banana assortment.

This will serve as the baseline from which future wages will be compared and, from 2021 onwards, they will gradually bridge the living wage gap by at least 10 per cent each year.

“Living wage is one of the priorities of the Dutch Agreement for the Food Products Sector," explained Jordy van Honk, programme director at IDH. "With this retail commitment, we can aim to ensure that people working on banana plantations will increasingly earn a wage that enables them and their families a decent standard of living.

"Although a lot of workers do earn the local minimum wage, it is often below the living wage benchmark," he continued. "This is a problem which is recognised by the supermarkets. They cannot change everything on their own, but together we can make a change.”

Bananas are the most commonly sold fruit in supermarkets all over the world, with the fruit being produced in countries such as Costa Rica, Ecuador and Colombia.

In top-exporting countries where estimates of prevailing wages are available, banana plantation workers tend not to earn the wages needed to meet their basic needs. A living wage ensures that, in a particular time and place, the remuneration received by a worker is sufficient to afford a decent standard of living for the worker and their family.

Elements of a decent standard of living include food, water, housing, education, healthcare, transport, and other essential needs (including provision for unexpected events) and, as such, closing the gap between the current wage and the living wage improves a workers’ standard of living.

"Cooperation is essential to implement the agreements made," the IDH said in a statement. "In top exporting regions and consuming countries worldwide, living wage initiatives have not yet kicked off. Buyers do not always know where their bananas come from, what workers currently earn, how far those wages are from a living wage and how to best close the living wage gap.

"Making the supply chain more cost-efficient and increasing wages is complex and often requires a complex solution. The impact of individual parties can be limited, especially when buyers have a small market share and when suppliers sell their harvest to multiple buyers.

"Working on living wage, workers’ needs are at the core, however for the suppliers and workers, it is also important to safeguard the long-term sustainability of the sector, its competitiveness and the jobs," the organisation noted. "This needs to be taken into account in all living wage initiatives. To ensure this it is also key that as many banana producing countries are included, so the needs of workers everywhere and the competitiveness of the sector in all producing countries are secured."

IDH said that it would continue to invite other interested private sector parties to join the Banana Retail Commitment, such as supermarkets in other countries outside the Netherlands, as it looked to increase the positive impact on living wages.

According to the supermarkets involved, the Banana Retail Commitment is an important milestone.

“Supermarkets are competitors, but when it comes to a more sustainable supply chain and risk reduction, private sector parties can certainly work together," they said in a joint release. "For example, through dialogue with local governments and trade unions, we gain insight into local challenges and solutions. If we succeed, we have paved the way for other products.”

Jennifer Muller, CBL sustainability manager, added: "The signing of this commitment underlines the willingness of the retailers to take responsibility for making their supply chain more sustainable. The commitment illustrates how joint ambitions within the IRBC agreement lead to concrete projects with social impact. The experiences gained with regard to transparency and risk management are included in the embedding of due diligence throughout the entire chain.”