Nasa says lettuce grown on the International Space Station are just as tasty, nutritious and safe to eat 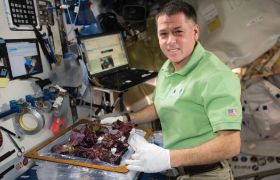 The study's findings, which were published by the journal Frontiers in Plant Science, indicated that red romaine lettuce crops grown by Nasa scientists on board the International Space Station constituted "safe, edible, fresh" food with the potential to supplement the astronauts' diets.

The lettuce was grown between 2014-16 using the Vegetable Production System, known as Veggie, which is described as a "simple, low-power" system comprising two units, alongside a more sophisticated growth chamber called the Advanced Plant Habitat.