A shortage of workers to harvest some of Italy's most important fruit and vegetable export items is emerging as one of the major knock-on effects of the current coronavirus outbreak.

With concerns over the spread of the virus likely to deter foreign workers heading to Italy from eastern Europe entering the country in the coming months, the future for production of fruit including peaches, nectarines, plums, cherries and strawberries, as well as a number of different vegetable crops, looks uncertain.

Valtiero Mazzotti, Director General for Agriculture and Fishery in Italy's largest fruit-producing region, Emilia-Romagna, said the longer-term impact of coronavirus on the country's fresh produce industry was going to be felt most in the production phase, where the need for immigrant workers remains absolutely critical.

"We need the government to support us," he told Fruitnet, echoing calls from other officials in the region who have requested a raft of official measures to support producers, including tax breaks, suspension of loan payments and other financial support.

"For Emilia-Romagna, at the moment it is not peak period, but when it comes to harvesting fruit in June/July, the risk is that the usual flow of seasonal workers could stop," Mazzotti commented.

"That foreign labour force typically comes from eastern Europe, from countries including Poland, Romania and Hungary.”

Concerns also remain over the potential damage being done to Italy's reputation as a fresh produce supplier.

"The worry is that this will have an adverse impact on the Italian agrifood sector, with export sales falling because people believe the goods themselves could carry Covid-19," he explained. "That is completely untrue, but this point will change rapidly with the evolution of the infection in other countries." 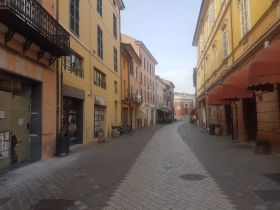 Mazzotti confirmed that supermarkets were experiencing unexpected peaks in terms of consumer demand, as the public switched in great number to eating meals at home.

"Things are particularly tense at the moment and the situation as far as coping with infections is very difficult especially in the west of the region, towards Lombardy, where there are a lot more cases," he said.

Even before a 6pm curfew was imposed earlier this week, he noted, far fewer people were eating out at bars and restaurants.

Now new restrictions have entered into force in order to limit social activity and contact between people, which means leaving home is allowed only for reasons relating to work, health or emergencies.

The trend towards more frequent consumption at home has placed unprecedented pressure on major retailers and the country's broad network of independent grocery stores to cope with the number of shopping trips now being made.

All hands on deck

At Milan's wholesale market, management company Sogemi has underlined new official rules requiring anyone working with fresh produce to wear single-use gloves and to wash their hands at regular intervals.

Other actions prescribed by the market so that traders  meet the requirements of Prime Minister Giuseppe Conte's 8 March decree include ensuring there are working wash stations with anti-bacterial soap and single-use paper towels, purchasing anti-bacterial gel dispensers, using masks, keeping people a metre apart, and advising of any staff with a high temperature.

Customers are also required to undertake similar actions, as well as being invited to make their purchases "as quickly as possible".