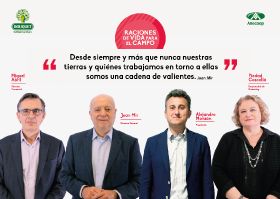 The Anecoop team at the virtual launch of the campaign

Anecoop has fired the starting gun on the 2020 Bouquet seedless watermelon season, during which it expects to market around 150,000 tonnes of the fruit.

Presenting details of the new campaign at a virtual launch event on Wednesday, the company said it would be based on the values that represent the rural environment and agriculture, one of the main economic engines of Spain, under the slogan “Slices of life for the field”.

The €860,000 campaign, which will focus on key markets like France, the Czech Republic, Belarus and Ukraine, as well as Spain, features a range of online and offline activities centring on the www.bouquet.es website.

Marketing manager Piedad Coscollá said these will include a redesigned fruit label highlighting the importance of rural farming, TV spots including as sponsorship of culinary programmes, radio advertising, print advertising in the specialised and consumer press, online actions featuring well-known social media personalities, aerial advertising on Mediterranean beaches and collaboration with inclusive community sporting events after the lockdown is eased.

This year also sees the launch of a new variety with a thin skin, intense red colour and very sweet flavour that will be marketed under the Bouquet Premium brand.

The Bouquet watermelon was the first seedless watermelon on the market and today, 28 years later, Anecoop continues to be the leading Spanish supplier of watermelons to the European market.

“Bouquet watermelons have an important social value, with a production calendar that covers six different provinces and allows numerous farmers and their families to continue with their agricultural activity all year round,” said Anecoop president Alejandro Monzón.

“We want to communicate to consumers that, by choosing our Bouquet watermelons, they are helping to give life to the countryside, avoiding its abandonment and fighting against a wider emptying of Spain.”

The company’s managing director, Joan Mir, said the agricultural sector had shown its true mettle during coronavirus crisis by continuing to ensure the supply of food despite all the obstacles thrown up by the pandemic.

“This is the time to become aware of the strategic value of agriculture, as a strong and independent sector that allows us to face situations such as the current one without having to rely on third countries to feed us,” he said.

Its emblematic striped red watermelon will once again make up the bulk of this volume, although production of black-skinned watermelons and organic fruit are also rising steadily on the back of strong market demand.

Anecoop said the recent incorporation of Castilla-La Mancha-based cooperative Santiago Apóstol de Tomelloso into the group will allow it to significantly increase its watermelon output in August and September when demand peaks.

Anecoop’s commercial director Miguel Abril said the company hopes to increase its export quota to 14 per cent, consolidating its position as the leader in the seedless watermelon category.

He predicted that watermelons “will be a favourite in shopping baskets this summer…as they are a product associate with good weather, are more affordable than other products, and ideal to share at home with the family”.