Vertical farming has long been seen as a solution to rising populations and increasing urbanisation, but its efficiency may make it key to sustainability in general 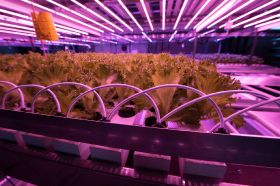 Finland-based Novarbo, part of the Biolan Group, is helping growers to adapt to the concept of vertical farming and all the benefits that come with it, according to project engineer Arttu Lammensalo.

A specialist in greenhouse technology, Novarbo’s Vertical Farming Concept is able to solve the challenges of various operations, he said.

According to Lammensalo, a facility equipped with climate control and heat re-use systems is an extremely energy-efficient way of cultivating high-quality plants indoors.

Any surplus heat energy is stored for reuse, while food transportation is decreased by moving production closer to the consumer, reducing the carbon footprint. A large amount of transpiration from the crop is captured from the air and returned to the irrigation system.

In addition, with Novarbo Growisor software, the grower is able to optimise the plant growth factors of the fully automated facility, Lammensalo said, enabling long-term production planning and wireless tracking.

“Our first vertical farm serves as our laboratory for climate control experiments,” he explained. “We want to help people to adapt to vertical farming. We have collected data for over a year and a half, working on more than ten products, determining the effect of LED lights at different times and for different periods of time. The climate control system allows us to improve irrigation efficiency by 90 per cent.”

According to Lammensalo, vertical farming is quite expensive initially, but after five years, you can expect to get your investment back. “Some are a little afraid of this technology,” he said. “If there is a power cut, for example, you need a backup energy source. Herbs and salads can be quite expensive in the winter, though, so the costs can sometimes balance out.”

Vertical farming is also gaining considerable attention as a solution to feeding the large numbers currently crowded into the world’s cities.

“Vertical farming will be useful anywhere there isn’t much growing area,” Lammensalo stated. “In Singapore, they import most of their herbs and vegetables from abroad, so they are very keen on vertical farming to avoid any supply issues. It also significantly reduces the carbon footprint, as well as the water footprint, so it’s a good solution in countries that suffer from water shortages.”