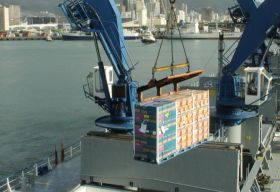 Sources in shipping circles have confirmed that the main European continental services on the normal Europe-South Africa service are now bypassing Cape Town because of the delays experienced at the port.

At least one of the shipping companies said that by including Cape Town in its alternative schedules they are able to offer a better service to South African exporters.

The exports of apples and pears, as well as citrus, have been disrupted by delays at South African ports from the start of the peak export season.

In his latest logistical report the Citrus Growers Association's (CGA) Mitchell Brooke gave an overview of how exports have been going during the past three months.

He said that the decision by the shipping lines to bypass Cape Town and include the port in some of their other services is deemed a much more conducive measure to keep the supply of citrus consistent.

“Durban, Ngqura and Port Elizabeth ports are operating as well as can be expected under Covid-19 circumstances," Brooke outlined. "Cape Town port is improving – but will take some time to deal with the backlog.

“At the start of South Africa’s Covid-19 lockdown at the end of March, much concern was raised regarding the reduction in operational capacity at the country’s container terminals operated by Transnet Port Terminals," he continued. "Transnet took heed of the call and by the end of April, Durban, Port Elizabeth and Ngqura terminals had increased capacity to 100 per cent. This was done by applying strict procedures so to safeguard the workforce while providing much needed business continuity measures.

"At this stage vessels calling at Durban, Port Elizabeth and Ngqura terminals are working productively without any berthing delays,” Brooke explained. “However, the Covid-19 pandemic has impacted the Cape Town container terminal which has only been able to operate at 50 per cent capacity due to high numbers of staff being affected by the pandemic. Exports of citrus is continuing from Cape Town with a main focus on services to Europe, UK, the Med, Russia and North America.

“Berthing shipments are being delayed. Citrus containerised exports from the Western Cape are being trucked in high volume to Port Elizabeth and Ngqura for export to ensure continuity in supply to markets.”

This has also been the case for apple and pear producers and exporters. This means that containers and other loads are transported overland at high cost between 800-1,000km from the Western part of the country to the two eastern ports.

Mike Economo, veteran executive at MSC, confirmed that the company had included Cape Town as the most southern port of call on its schedule along the west coast of Africa.

“We believe we are providing a very effective service on this route to as far as St Petersburg, while at the same time eliminating delays on the other South African schedules," Economo said. "It is to the advantage of the South African industry.”

Brooke ssaid that the conventional breakbulk service provided by the Reefer Alliance, Seatrade and Baltic Shipping, had been operating without any delays.

“A vessel a week is calling at Durban, Port Elizabeth and Cape Town for shipments to Europe and Russia," he explained. "Similarly, conventional breakbulk shipments to Japan and China continues unobstructed from Durban and to the US from Cape Town.”

Unlike the problems at the container terminal in Cape Town, citrus for the US is mostly loaded from the old terminal quays in the main port. The fruit is supplied from coldstores outside the port and loaded directly into the waiting vessels.

Brooke said the CGA had a much more optimistic outlook that supply of citrus from South Africa would continue unobstructed and with relative consistency as production enters the peak season.