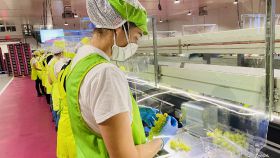 Murcia’s El Ciruelo has been working flat out since the start of the stonefruit campaign in March to satisfy the surge in demand seen in the weeks following the arrival of coronavirus in Europe.

The company, whose output is heavily focused on early stonefruit varieties, has had to implement three eight-hour shifts at its two packhouses in Alhama de Murcia and Cieza in order to comply with social distancing requirements.

Commercial director Rupert Maude says demand has been strong from the start of the campaign. “Usually we would expect to have packed around 20,000 tonnes by mid-June, but this year we’d packed more 27,000 tonnes despite the constraints of Covid-19,” he told Fruitnet.

With the table grape season now underway, Maude anticipates that demand for immune-boosting fruit and vegetables will remain strong throughout the summer, even as the threat of Covid-19 starts to recede.

With new production areas coming on stream and older vines and varieties being continually replaced with newer, more productive varieties, the company, which supplies markets throughout Europe and further afield in Asia and Africa, is anticipating a significant increase in output this year.

In all, El Ciruelo has 3,200ha of production spread across Murcia, Almería, Alicante and Albacete, most recently adding 180ha in two new table grape farms on the south eastern coast. The company has also invested in new sorting lines at its packhouse in Cieza, one of two state-of-the-art facilities handling the 45,000 tonnes of grapes and 40,000 tonnes of stonefruit it produces annually.

In Brazil, meanwhile, it is building a new packing and distribution facility in Petrolina, due for completion in mid-2021, following its acquisition of grape producer Labrunier last year.

“Our imported grape programme is growing every year,” says Maude. “We supplement our Spanish production with Southern Hemisphere grapes from Chile, Peru, South Africa and now Brazil. Labrunier’s farms harvest two crops a year [one in April/May and the second in October/November], giving us an extra 25,000 tonnes and allowing us to offer our customers our own production for eight months of the year.”

“There are very few varieties that grow well, sell well and eat well, so it’s vital that we get the basic mix right,” he notes, adding that the closest he’s come to a perfect variety is Autumn Crisp. “If I could just grow that year round I would,” he laughs.