Chile edges closer to having its own cherry varieties 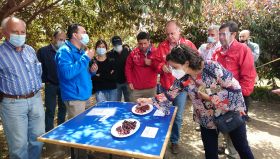 Chile is steadily advancing towards its goal of developing its own cherry varieties, according to producer organisation Fedefruta.

Showcasing its progress to agricultural groups and Agriculture Minister Antonio Walker in the O’Higgins Region at a recent open day, the INIA-Biofrutales Cherry Genetic Improvement Programme said that in the coming years, producers would be able to count on new selections.

One of the most promising varieties, Selection 21, is a bicoloured Rainier-type cherry with a good postharvest life and lower cold requirement.

It could be produced in areas as far north as Valparaíso and Coquimbo, allowing Chile to extend its presence in the Chinese market by bringing forward its shipping window.

The programme has a total of 16 advanced cherry selections which it plans to test in the next few years.

“INIA, together with Biofrutales, is working on this cherry tree genetic improvement project. We’re more than halfway to obtaining a new variety and we hope that in the next five years we will have a first Chilean cherry variety,” said programme director Gamalier Lemus.

“We can’t wait for the genetics or technology to be developed in another country and then be adapted to our conditions,” he said.

Cruzat said it would be two or three more years before any new varieties reached the market.

Chile has around 50,000ha of cherry production, and this year’s export volume is expected to reach 330,000 tonnes.

INIA's work with Biofrutales has already yielded tangible results for the development, propagation, production and trade of other home-grown Chilean fruit varieties such as the Maylén grape, which is exported to markets such as China, the UK, North America and the Middle East.

“Breeding work is long-term and no one can solve these challenges alone. We have the people and the capabilities, and we need to have the conviction, the time and the resources, so that the vicissitudes of all seasons do not stop us in this work,” said Cruzat.