A tale of two sides of the Orange River 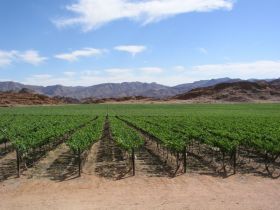 It is a tale of opposing fortunes for table grape growers in Namibia and along South Africa’s Orange River so far this season.

While Namibian growers at Aussenkehr are celebrating a record export volume of more than 8m cartons for the first time, untimely rain over the past few days has caused disruption for South Africa’s Orange River producers.

SATI said that packing along the Orange River had been disrupted and delayed this week (week 1) due to heavy rains in the Northern Cape.

This weather also affected the tail end of the Namibian season and brought wide relief to farmers in drought-stricken areas of both Namibia and the Northern Cape Province.

While the rains are a major blow for table grape growers, most of them also recognise the fact that they are bringing relief to a wide region which has suffered severe drought for many years.

SATI acknowledged this when it stated that, although ill-timed for table grape growers, the rain was a welcome sight for many.

“Producers in the region expect to resume packing towards the end of the week and the weather outlook over the next ten days is favourable,” the group said.

In Aussenkehr, Andre Vermaak noted that the area hardly ever had rain in December or January.

“We had eight millimetres over the weekend which is about the total rainfall we get in three years,” he said.

Heavy rain also occurred in Southern Namibia and to the north of the country which will boost the country’s wildlife regions.

“The wild horses of Southern Namibia have been running over the planes as the rain set in and rivers are full and dams overflowing,” he continued.

“At Aussenkehr we were at the end of our season and also stopped packing for a few days," Vermaak added. "We will finish our season at the weekend. We predicted an export crop volume of 7.4m but we can now confidently say that we will end with more than 8m cartons.”

For growers on the South African side of the river, things are now much different. The rain came after the season started some 14 days later than normal, resulting in lower volumes exported in the pre-Christmas period.

“The start of the season in the Orange River region was about 14 days late which means that a good 30 per cent of the crop still needs to be packed," SATI continued. "While it will take some time to assess and quantify the damage due to the rain, producers are optimistic that the later cultivars will be relatively unaffected."

In recent times growers have increasingly covered their vineyards under netting or plastic for protection against these circumstances.

SATI outlined that the advantage of the geographical diversity of the five table grape growing regions in South Africa was evident, with the industry confident that it would continue to meet weekly demands across all its markets.

“The mid to later regions of the Western Cape, namely the Olifants, Berg and Hex River regions, are experiencing excellent ripening and early harvesting conditions. The crops are very promising, both from a volume and quality perspective.”

While it is too early to say just where the volume will end up this year, it is clear that it will fall short of the 20m-mark.

“We need to let everything dry out first because it has been very wet, with rain from Saturday until Tuesday morning,” explained one grower. “Then we can assess the situation and do the best we can so salvage what is left.”