The Belgian cooperative has auctioned its first aubergines of the 2021 season, as production gets set to rise this year 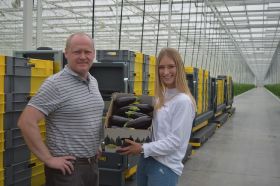 The first Belgian aubergines of 2021 were auctioned this week by the BelOrta cooperative, supplied by producer Steven Van Nuffelen of Stannuco and bought by Euro-Fruits from Le Roeulx.

According to BelOrta, Flandria aubergines remain in demand thanks to the enduring popularity of the Mediterranean diet and their use as a healthy substitute for meat.

BelOrta’s growers supplied a total of 12,600 tonnes during the 2020 season, which runs from February to November. This year, production is likely to rise, since the area dedicated to ​​aubergines is set to increase by 6 per cent to 31ha.

In addition to its classic Flandria aubergines, BelOrta also sells Turkish aubergines, as well as “Oven & Grill” packs complete with oil and herbs, ready for the oven or the barbecue.