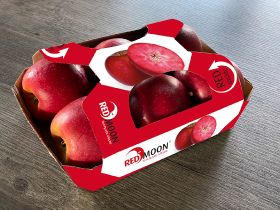 The Italian harvest of Red Moon-branded apples started in mid-September, kicking off with the earliest cultivar RS-1. This will be followed in a few weeks by the later cultivar RM-1.

The red-fleshed and scab resistant apples are cultivated and marketed in Italy by Clementi, while organic and biodynamic production is marketed by Bio Meran.

Red Moon is this year anticipating a larger crop despite some losses caused by spring frosts. Italian volumes are expected to hit 2,500 tonnes in 2021/22.

Harvesting of the international crop intentionally started later this year in order to obtain an apple of higher quality that was ready to be commercialised, the marketing group explained.

The first seasonal sales in key markets such as Germany have already started. Red Moon said that the apple's popularity among northern European consumers had also led to production tests in the Lake Constance area.

Meanwhile, a similar test is taking place in Serbia, with the aim of serving the countries of Eastern Europe, including Russia.

The popularity of Red Moon apples is also expected to be boosted by the ongoing trend towards healthy products.

Red Moon said that the results of research conducted by the Research Center Laimburg, together with the University of Trento and the Edmund Mach Foundation, on the relationship between polyphenols in the pulp and antioxidants in the skin of apples, could be important in this regard.

The comparative study of 22 varieties, including conventional, old and new red-fleshed apples, showed that Red Moon-branded apples should be eaten with the skin, for its high concentration of anthocyanins.

Furthermore, red fleshed varieties such as Red Moon could be used as a so-called 'functional food'.

"Volumes, experience and quality of our red-flesh apples are increasing," explained Luis Clementi, technical manager of Red Moon Company, licensee and partner owner of the brand and of Red Moon Srl. "Every year the volumes are growing due in part to new areas, but especially for the entry into full production of the first plants.

"Our strategy is to move forward with caution: we have still to learn how to best manage the two cultivars and we aim for top quality, from the field to the shelf, adopting all solutions to surprise customer while respecting the environment and the
growers," he added.

Red Moon is an umbrella brand for a range of red-fleshed scab resistant apple varieties, developed in France by Jean-Luc Carrieres and the nursery Escande.

The brand is owned by the Red Moon Company, founded by Carrieres, Escande, the Dutch consultant Hans Scholten and the South Tyrolean companies Fratelli Clementi and Kiku Variety Management.

The company Fratelli Clementi was initially the only licensee for the cultivation and marketing of Red Moon. Meanwhile the South Tyrolean Company Bio Meran joined for organic and biodynamic production.

Barolli Orchards in Australia’s Goulburn Valley joined the Red Moon apple team in 2019, to grow and market red-fleshed apples for the Australian market.