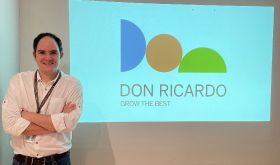 Peruvian table grapes are heading to more markets than ever this season, but the challenging logistical situation is casting a shadow over the new campaign.

Provid is forecasting a table grape harvest of 62.5m cartons for Peru in 2021/22, an increase of 9 per cent over last season. What are the expectations for the start of the new campaign? Are we set for a smooth transition between the Northern Hemisphere and Southern Hemisphere campaigns?

Arturo Hoffman: The season started with the first Red Globe shipments in week 34. Exports of seedless grapes began in week 38, with the first white and red seedless being exported to the Northern Hemisphere. We expect a long season, with decent volumes until week 7 and then volumes winding down by weeks 14-15.

With regard to the transition, the US isn’t expecting a long season as a result of the heat waves, which have affected the quality of the fruit, and also due to the limited availability of labour which has limited the volume that California is able to harvest.

As for Spain and Italy, although they do have volume for late harvest, it is not at a level that will put the brakes on the beginning of the Peruvian campaign. How much they have available is highly dependent on climatic conditions over the next several weeks.

Logistics disruptions are causing chaos all over the world. To what extent will these impact the new season?

AH: To date, this is by far the factor that has us most concerned. Costs have risen considerably, but above all what worries us is the weakness in the logistics chain. There are few reefer containers available, the itineraries of the shipping companies are unpredictable due to port congestion, especially on the East Coast of the US and in Asia, plus there are internal logistical problems in the markets, such as the lack of trucks and drivers in the US and UK. And as the icing on the cake, the port infrastructure has collapsed. From my point of view this will be by far the biggest challenge of this season.

Peru recently made its first shipment of table grapes to Argentina after the recent opening of that market. How do you see the potential in that market and in other Latin American countries? Given the rapidity with which production is growing in Peru, do you think exporters will have to focus more on the regional market, as well as the US, Europe and Asia?

AH: The Argentine market is for a specific window, you can enter until the end of November, since after that the domestic harvest in the San Juan area gets underway and the Argentine state protects the internal competitiveness of its industry.

I believe that we need to open all the markets that we can, and we will have to see their potential once we begin to generate commercial ties. Provid and our plant health authority, Senasa, are also in negotiations with Ecuador, which we hope will be a market that we can serve soon. The more markets we open, the more possibilities we have and the more stable the business will be in the medium term.

As for Asia, how are the negotiations for the opening of the Japanese market progressing?

AH: After several years of negotiations between Provid, Senasa and the Japanese authorities we have managed to advance in the protocol and include a large number of varieties, which had been the main obstacle up to now. Negotiations are in the final phase and we are hopeful that we will be able to access this market this year. We believe that it is a market where we can add a lot of value as an industry.

Is there any other news or factor you want to share that you think will impact the new export campaign?

AH: Peru continues on the path of growth adding value, that is, based on high quality varieties that are demanded by the markets. Likewise, it has competitive advantages over competing industries in terms of fewer adverse weather events, which makes Peru a reliable supplier for the global market.

In addition, this year Peru is consolidated as the second largest exporter in the world in volume, so the industry has the duty to handle volumes in a well thought out way to keep markets stable and well informed. Provid has been working on these lines for the last year and a half and we hope that it will allow Peru not only to be a very good supplier of table grapes but also a country of origin that adds a lot of value to the industry.