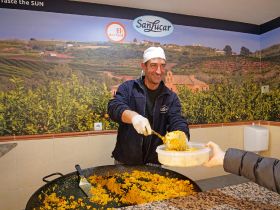 Valencia-based SanLucar has won a Business and Sustainability Award for its commitment to social responsibility.

The prize, promoted in Spain by Banco Sabadell and Levante-EMV newspaper, recognises the good practices of the companies in the Spanish region of Valencia, based on a series of environmental, social and governance criteria.

Out of more than 30 entries to the Social Responsibility category, SanLucar came top for its soup kitchen project in the city of Valencia, an initiative run in conjunction with Coordinadora Solidaria de los Estibadores del Puerto de Valencia (Solidarity Coordinator of the Stevedores of the Port of Valencia).

“We are honoured to have received this award. Especially because it recognises the efforts of the solidarity kitchens, El Puchero and El Puchero Portuario, where 500 people in vulnerable situations are cared for every day,” said Stephan Rötzer, founder and owner of SanLucar.

“We want to share this Prize with our partners in the project, with the human team working in the two solidarity kitchens: from cooks, social workers and volunteers involved in the initiative. And of course, with all the companies and entities without whose donations and selfless collaboration we would not be able to provide service to the users.  To all of them, my sincere thanks.”

El Puchero: much more than a plate of food

The two soup kitchens provide more than 500 vulnerable people with a daily takeaway meal, with the aim of not breaking the habit of eating together as a family, and protecting the dignity of the users.

The project also offers social care to its users with the aim of encouraging their autonomy and providing them with the necessary tools to enable them to be self-sufficient.

Education is also promoted by organising workshops and offering free school support classes for the youngest children, many of whom were unable to continue their studies during the pandemic because they do not have access to a computer or internet, and therefore could not attend the online classes given during the months of lockdown.