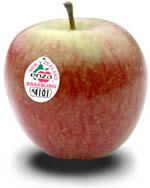 According to Ian Palmer, chairman of Pipfruit NZ, the country looks likely to export around 68,000 tonnes of Braeburn this season, down considerably on the pre-season forecast of 87,500 tonnes.

"The crop will be siginificantly shorter than estimate," Mr Palmer told Eurofruit Magazine. "The CA programme is currently being packed and the continuation of lower export extraction rates is continuing. I think all global markets will be short on Braeburn, but it is likely that a little bit more will be diverted to the EU due to the strong NZ dollar–euro exchange rate, compared with the UK pound or the US dollar."

Meanwhile , Royal Gala exports are set to be just short of initial estimates at around 96,000 tonnes. “There has been a larger portion of UK-sized fruit traded in Asia, where the fixed prices on offer have been a more viable option,” revealed Mr Palmer.

Pricing levels are reportedly approaching a sustainable level, despite continued exchange rates pressures. "Apple sales in the EU are not really at high volumes, but pricing seems to be maintaining its level," said another leading exporter. "Overall, price levels are good and not a cause for complaint, although foreign exchange rates are diluting things quite a bit."