Full speed ahead for Serbia

Fruit Logistica 2010: The country's exporters are out in force again in Berlin this week as awareness of global markets grows 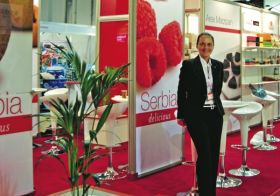 Here in Berlin at Fruit Logistica 2010, what major developments in the Serbian fresh produce export business are you looking to highlight?

IN: Serbian exports of fresh fruit and vegetables are at the same level compared with last year, which is really satisfying considering the seriousness of the world economic crisis. Export up until November 2009 amounted to US$335.8m, out of which approximately 81 per cent represents frozen fruit and vegetables (individually quick frozen) and 19 per cent is fresh.

When it comes to individual categories of fruit, the most successful are Serbian raspberries, with a volume of 35,946 tonnes and a value of US$81.4m. Other types of fruit had an excellent yield this year, as a result of a good season with a lot of rainy and sunny days during the spring and mid-summer seasons. Elsehwere, 700,000 tonnes of plums were produced in 2009, which is 14 per cent more than the previous year, while pear production was up 12 per cent on 2008 at around 70,000 tonnes.

The volume of apples, meanwhile, reached 298,000 tonnes, with the most prevalent varieties being the sweet and red ones such as Jonatan and Idared, as well as the Russian market’s favourites – namely green and sweet-sour varieties like Granny Smith and Golden Delicious.

For the next couple of years, Serbian fruit producers and fresh produce exporters will focus on production of sweet cherries, as there is increasing international demand for these products. In addition, the price is more than appropriate for our producers and they have been quite encouraged to focus on growing and producing this fresh fruit.

Can you tell us a bit more about the Serbian companies appearing at this year’s Fruit Logistica?

NV: This year, the participation of Serbian companies is being organised and financed by USAID, in coordination with SIEPA and the Serbian Ministry of Agriculture. The primary benefactor is the Fruits of Serbia Association, which organises the companies’ participation. A total of 12 groups are showcasing their products under the Fruits of Serbia banner. Products include apples, stonefruit and plums, plus a wide variety of vegetables and salads, fresh wild mushrooms and watermelons.

How would you describe the prospects for Serbian fresh produce exports in 2010 and why?

IN: The sector’s future prospects are quite bright. More and more international companies are setting up in Serbia; Russian buyers are increasing their coordination with Serbian producers; and these producers are more in touch with market demands. Generally speaking, Serbia will produce more and more fruits and vegetables due to its highly affordable labour force, tax policies aimed at small and medium enterprises, and free trade agreements with CEFTA countries, Russia, Belarus, Turkey, and EU members.

However, strong competition from Poland and Chile for fruits and vegetables could affect future exports by pushing down the price for final consumers. Thus, Serbian producers will be investing a lot of effort in enhancing their orchards with diversified varieties and producing a greater yield.

Signing the Stabilisation and Association Agreement between the EU and Serbia in April 2008 triggered an increase in the influx of foreign investment, mainly European, into the country’s fruit and vegetable production. Nowadays, Serbia is showing economic stability and, together with ideal natural conditions such as its climate and latitude, as well as the most affordable electricity in Europe, our country shows huge potential in fruit and vegetable growing and processing.