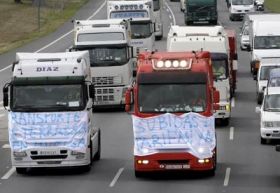 More than 90,000 Spanish hauliers are reported to be taking part in an indefinite strike over the rising cost of diesel, a commodity that has increased in price by 20 per cent so far this year.

Although Spain’s largest hauliers’ union is not participating in the industrial action, the lorry drivers taking part – most of whom are self-employed or work for small to medium sized firms – have claimed that supermarkets could run short of food within days.

According to the BBC, the action has already disrupted cross-border traffic between Spain and France – itself the scene of a recent hauliers’ strike – with strikers reportedly attacking lorries crossing picket lines.

Rupert Maude, commercial director of Spanish stonefruit producer El Ciruelo, said that although his company had not been affected as yet by the strike, the potential for loss of product across Europe was “huge”.

“It’s going to have a major affect on us and on other producers – I would estimate that it could cost the sector several hundred thousand euros a day,” he said.