Fyffes will ship up to 1,500 extra pallets of bananas per week via Portsmouth as part of new agreement with UK port 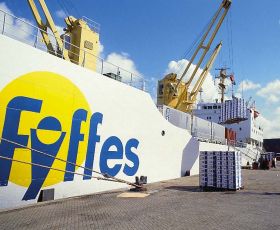 Officials at Portsmouth Commercial Port in the UK have announced they have secured additional volumes of bananas that will be shipped into the port by Ireland-based tropical produce importer and distributor Fyffes.

The move is expected to increase the volume of bananas entering the UK through Portsmouth Commercial Port by 15 per cent.

The vessel New Breeze brought the first new banana volumes for discharge from Belize, and arrived at the port on Wednesday (18 June).

The ship unloaded approximately 600-700 pallets, with volumes expected to increase to around 1,200-1,500 pallets per ship in the future. The service will operate on a weekly basis.

"This is good news for the port and Portsmouth's position as a major fruit importer," port manager Martin Putman said in a statement. "With the current volumes of imported bananas coming into the UK it firmly establishes Portsmouth as the UK's number one banana port."

Fyffes is resuming the shipment of bananas by conventional vessels following changes to its shipping of bananas from Belize and Guatemala in containers.