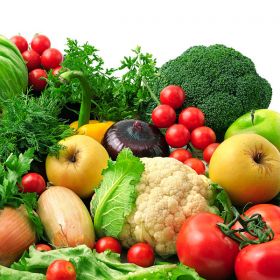 Scientists investigating the potential health benefits of eating five portions of fruit and vegetables per day as advised by the World Health Organization have concluded that the recommended daily amount be increased to at least seven.

The study, which was conducted by researchers at University College London and published in the Journal of Epidemiology and Community Health, found that eating more fresh fruit and vegetables lowered the risk of mortality.

It also identified a stronger link between fresh vegetable consumption and a reduced mortality rate, while stating that intake of frozen and canned fruit was apparently associated with increased mortality.

"Eating at least seven daily portions was linked to a 42 per cent lower risk of death from all causes and from cancer and heart disease/stroke of 25 per cent and 31 per cent, respectively, after excluding deaths within the first year of the monitoring period," the report stated.

Dr Oyinlola Oyebode, who led the research, said: "The clear message here is that the more fruit and vegetables you eat, the less likely you are to die at any age. My advice would be however much you are eating now, eat more."