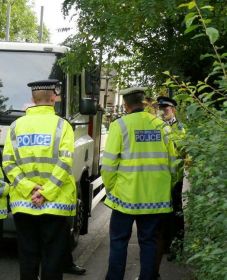 The Gangmasters Licensing Authority (GLA) and Derbyshire Constabulary have joined forces to help businesses identify any workers who may have been trafficked into the county for the purposes of forced labour.

The two organisations began their latest partnership arrangement under the name ‘Project Advenus’ this week (w/c 28 July) by embarking on a programme of visits to Derbyshire companies that might be at risk from trafficking within their labour supply chain.

Paul Broadbent, GLA CEO, said: “Trafficking workers into the UK for forced labour is a problem that is on the increase in the UK. This was highlighted recently in Derbyshire by some shocking, high-profile cases, where people have been forced into lives of modern-day slavery.

“The GLA works with other agencies to combat worker exploitation and can help protect people from this horrific crime. By teaming up with the police to visit Derbyshire businesses, operating in sectors that are typically targeted by traffickers, we hope to educate people in how to spot the signs of trafficking and forced labour. We will explain what they can and should do if they suspect it is going on.

“The companies will also be told how they can stop it from occurring in future. Prevention is the key to tackling and reducing opportunities for criminals to exploit vulnerable workers.”

Derbyshire Constabulary recently called on the GLA for assistance with an investigation called Operation Atwood. As a result of the operation two Slovakian couples from Derby received custodial sentences for human trafficking for the purposes of forced labour.

In another case, last week, a Slovakian man escaped being forced to work for six years in Derby after staff at the Roma Community Centre persuaded him to report his situation to the police.

Detective Inspector Mark Knibbs, from Derbyshire Constabulary, said: “A recent joint enforcement programme has highlighted the need to equip these larger companies with the necessary information and contacts to give them the best chance to spot and react to potential trafficking issues.

“It has been a productive partnership with the GLA, and between us, we hope to reduce still further the opportunities for trafficked people to be exploited in Derbyshire.”

The GLA operates a licensing scheme to regulate the supply of agency workers into agriculture, horticulture, shellfish gathering and all associated processing and packaging, thus protecting what in most cases are lowly-paid workers.

The companies to be visited have either unknowingly employed trafficked individuals in the past, or use large numbers of agency and/or migrant workers so are potentially susceptible to the issues of forced labour.