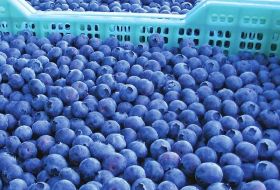 Argentine blueberry exports climbed 30 per cent to reach 16,500 tonnes in 2014 according to figures from the Argentine Blueberry Committee (ABC). The country dominated the early Southern Hemisphere supply window between August and October with a market share of 80 per cent, equivalent to 10,000 tonnes.

The US is the largest importer of Argentine blueberries, absorbing more than 60 per cent of the country’s export volume. Most of the US blueberry shipments were transported by air this season.

One of the topics up for discussion was the possibility of Argentina and Uruguay hosting the 2016 meeting of the International Blueberry Organisation in the Argentinean city of Concordia. The decision as to whether to host the event in the Southern Hemisphere or Asia will be announced in the coming weeks.

ABC president Carlos Stabile will be one of the speakers at this year’s Global Berry Congress, which takes place in Rotterman on 24-25 March.