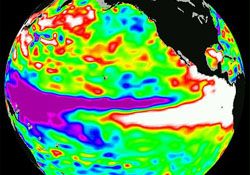 Climate experts are warning that the El Niño weather phenomenon currently sweeping through Latin America could be the most severe since 1997, causing severe drought in Central America and a significant increase in rainfall across the Caribbean throughout 2015 and early 2016.

The forum heard how Central America would continue to face very dry conditions, especially on the Pacific coast from eastern El Salvador to Panama, while the southern Caribbean and Atlantic coast and the Pacific coast of Guatemala would be subjected to excessive rainfall.

The forum was organised by the Executive Secretariat of the Central American Agricultural Council (SECAC), managed by the Inter-American Institute for Cooperation on Agriculture (IICA).

The situation will affect subsistence farming in the region, such as maize and beans, as well as commercial activities such as livestock, coffee and fruit. SECAC consultant Nadia Chalabi said coffee and fruit production may experience changes in flowering caused by high temperatures.

In Costa Rica, the effects of El Niño have been felt by fruit producers since May 2014 and in September last year the government issued an emergency decree to facilitate access to resources to support agricultural actitivities. The country’s Natonal Meteorological Institute warned that the phenomenon would intensify from June onwards, with areas hit by heavy rains and floods that could impact the production and trade of perishable crops like bananas, papayas and vegetables.